It was a rather unspectacular evening, or so we thought.

Ben DuBose, Clutchfans member The Cat and host of the Locked on Rockets podcast, had organized a #RocketsTwitter viewing party for a summer league game of all things. What started as random musings over whether the Rockets were going to sign and trade Iman Shumpert or if Chris Clemons might stick in the NBA turned into a flurry of excitement and one of the most memorable Rocket get-togethers ever.

This is an oral history of the wild night when Russell Westbrook became a member of the Houston Rockets.

First, let me give you some background. I am not a fan of Russell Westbrook. I think I lean pretty heavily towards Dave Hardisty’s line of thinking. But this post is not going to be about reactions to the trade, the fit, analytics, etc. There is time for that later and there are hundreds of them by now. This post is about a night with friends.

This was my first #RocketsTwitter party Thursday night, so naturally I wasn’t sure what to expect — especially since we were watching a Summer League game. Don’t get me wrong, I can watch Summer League games, but this summer had so far been rather uninspiring, both on the transactions log and on the courts in Vegas. I fired a text to Ben to let him know I would be early (because I always am, even when I think I’ll be late.) I’m hardly a shy person, but the weird thing about a Twitter get-together is that I literally have no clue what any of these people look like. I could imagine walking into Nick’s Place, not recognizing anyone, turning around and leaving. Instead, I recognized Ben and Matt Thomas of SportsTalk790 immediately, quickly took a seat and settled in for a memorable evening.

Our first order of business was kicking around the “boring” Rockets offseason. We wondered aloud whether the Rockets were going to do anything. It wasn’t spoken, but a vision of Rocketgirl’s (@00rocketgirl) “Do Something Rockets” meme was dancing in my head. 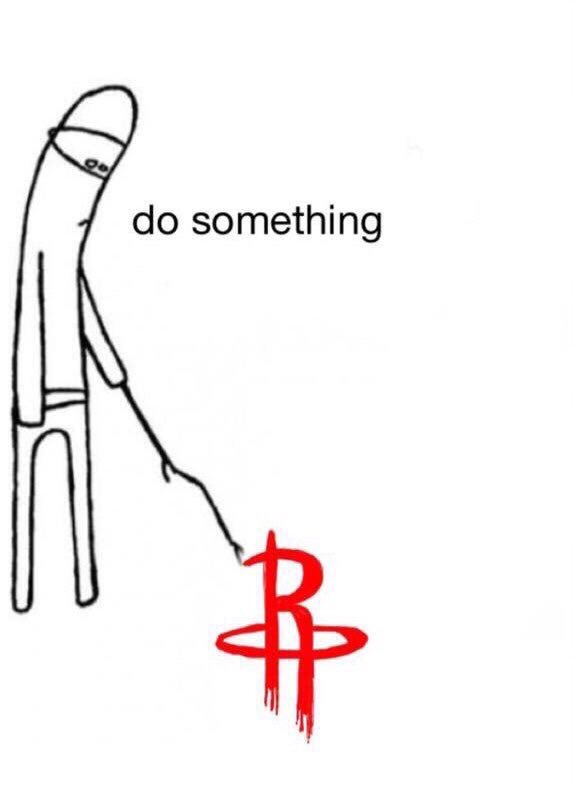 We were off to a great start though. Meeting folks like @aprilnicole82 , @Matt_ABC13, @p2s08 and others was really cool. It was good to put faces to the ClutchFans and Twitter handles and realize you aren’t the only one crazy enough to follow every move the Rockets make. In normal conversations with normal people you sometimes have to feign ignorance about sports stuff just to avoid seeming TOO obsessed. Not with these folks. This felt right. These were MY people.

Then we shifted to a ridiculous topic. Ben mentioned that ESPN’s Tim McMahon had reported on The Jump earlier in the day that he wouldn’t rule out Russell Westbrook to Houston yet. We all laughed. It wasn’t something to be taken seriously.

And then I did it. A moment now immortalized on SportsTalk790 (thanks to Matt Thomas) happened.

I polled the room, in an ironic way to be sure, with a leading question: “So we’re all unanimous that we don’t want Westbrook on this team, right?” It’s hard to believe now that I said those words at THAT moment, but I did. Most in the room made one of those faces that you see on reaction gifs when you aren’t sure how to express yourself:

One person did make clear she was pro-Westbrook. @Allison_Wollam was 100% on board. If there were others in the room who felt that way, they didn’t say. So credit to her. Matt Thomas had a good laugh about the situation and teased us saying that if Westbrook became a Rocket we’d all be changing our tune. I was defiant of course. I would NEVER root for Westbrook. It didn’t matter anyway, because if you’ve followed my Twitter timeline you know I thought there was no chance this was happening.

Are you kidding me?

It was minutes after that informal poll, maybe less than five. Minutes after Matt had laughed about the potential hypocrisy that we would never get to test. Minutes after we all moved on from a topic that seemed ridiculous when one of the guys at the table next to us let out a shout.

It was so coincidental that we all thought it was a joke.

To Twitter! The first thing was to make sure the account reporting this had that all important Blue Check. There are so many “Woj” imposters, surely that’s all this was. Nope! There it was, on Twitter, staring us in the face: The proof that couldn’t be denied.

The Oklahoma City Thunder have agreed to trade Russell Westbrook to the Houston Rockets for Chris Paul, first-round picks in 2024 and 2026, pick swaps in 2021 and 2025, league sources tell ESPN.

To fully grasp how crazy this was, you really need to read that timestamp. 7:26PM. The watchparty was set to begin at 7:30PM at Nick’s Place. I texted Ben at 7:01PM that I was five minutes away. It was twenty minutes tops. Twenty minutes between walking into a bar/restaurant to greet people I’d previously known as random internet handles and sharing in the reactions to one of the biggest trades in Rockets history.

If the first 20 minutes were uneventful, the next 3+ hours were “lit.”

So what happens at a #RocketsTwitter watch party in the moments following a shocking trade like this one? It’s as 2019 of an answer as you might guess. Live tweet reading! The rush began to find details of the trade. From somewhere at the table, someone reads out a tweet about the draft picks. Another reads a tweet about protections. Are you kidding? One tweet says we tried to do a trade that would have kept Chris Paul here WITH Westbrook? Another one reads that Paul will stay in OKC. Check that here comes Ramona Shelburne saying they’ll trade him after all! Or was it Woj? Who cares! There’s so much information coming at you that it’s impossible to keep up. Then the reaction tweets begin.

My first thought on twitter? Well, they hated us before and they’ll really hate us now.

Well #nbatwitter you wanted us to be the heels? Fine. We’ll be the heels. pic.twitter.com/0iDwCgS6Ow

(Thanks for the retweets!)

Kenneth (@YoltsKenneth) won the night in my opinion with:

(Side note: He’s right of course. I KNOW that Westbrook is going to steal Capela’s soul on a rebound at least once)

From then on the night was one of laughter, twitter memes and retweets, spelling out handles, arguing about efficiency and by far my favorite past time: checking your timeline for old Westbrook slander. (Note: No one deleted anything)

How did the group feel about the deal? Honestly the reaction was more “Holy crap can you believe this” for so long than any concrete “This is great!” or “This is terrible!” It’s really hard to describe the energy of a reaction like this when you are in a room full of these kind of people. My kind of people. It’s like a Clutchfans thread playing out right in front of you, a twitter feed happening at your table. Is THIS what it was like before the internet? I can’t begin to imagine.

As the night went on we moved on to other topics. There was Texans talk with Stephanie Stradley. There was blog talk with Justin Levine (@JustinLev) of @RedNinetyFour. There were tales of the celebration and debauchery that followed the Rockets second championship in 1995 and jokes about the ones too young to remember. There were discussions about beer and whether Blue Moon is a “girl’s beer” because it has an orange it. Pro wrestling in the 1990s? Oh yeah we talked about it! nWo 4 Life! Rock n Roll Express, Jim Cornette’s podcast, 83weeks with Eric Bischoff and Conrad Thompson, Paul Boesch and Houston Wrestling…we hit on it all. Did I mention There were “Russ Shots?” I’m still not exactly sure what those were. Ben had to leave us earlier than some. Something about needing to record a podcast.

The night finally ended around midnight. Ubers arrived for some and the rest piled into their cars. If they were anything like me they quickly turned to SiriusXM and listened to Frank Isola talk about the Westbrook trade. I was tired sure, but staying awake wasn’t a problem. When I got home I logged on to Clutchfans and relived it all again.

So what exactly happens at a #RocketsTwitter watch party for an uneventful summer league game when a huge trade goes down? As it turns out, life happens. Hope to see you there next time.